Hi everyone
I’m new here, looking around evaluating whether buy or not a PA-II sensor.
I have a very high level question: looking into the Milan (ITA) map - i’m living there - I see the PurpleAir sensors are giving PM10 and PM2.5 values much higher than those given by the offical state sensors (which of course use a totally different method for calculating PM concentrations - see: https://www.arpalombardia.it/Pages/Aria/Dettaglio-Comune.aspx?idComune=451).
For PM2.5, the average in the last 10 days is 19 microgr/mc, whereas your sensor in Milan (downtown there is only one) is about 122. The one day average is 38 for the state, is 131 for PA-II.
I know the PMS5003 sensors are low cost sensors, but how do you explain a so big gap among the two? aren’t the PurpleAir values totally unreliable vs the official ones, are they?
Thanks
Fabio

Hi Fabio,
I have not looked into PurpleAir PM10 values.
PurpleAir sensors are known to typically report higher PM2.5 values then regulatory PM2.5 monitors.
In the United States, EPA developed a national correction algorithm and applied it to PurpleAir values reported on their Fire & Smoke Map. https://fire.airnow.gov/
This helps the PurpleAir values to correspond better with FEM PM2.5 monitors and thus their reported AQI is more similar.
The PurpleAir map itself has a drop down selection of correction factors to apply.
I myself view PurpleAir and other low cost sensors as supplemental information, more qualitative than quantitative.
If one knows how the low cost sensor relates to the regulated monitor, then they can better interpret the readings from the low cost sensor and get a general understanding of the air quality in their area. This EPA webpage might help with additional information: Air Sensor Toolbox | US EPA
Regards.

Jasmine,
you perfectly got my point. I’ll look into the suggested pages and maybe come back in case of further doubts. Thanks so much
Regards
Fabio

Although not in Europe, I’ve monitored PurpleAir readings there just out of curiosity. And it seems like that section of northern Italy, around Milano, has consistently elevated readings. And the same on the other side of the Adriatic Sea, at same longitude, particularly in the Bosnia and Herz. area (but worse). Whereas just the other side of the Alps from northern Italy, Switzerland/Austria, is often green/clean. I would guess the differences are some combination of geographical factors, population density, and likely government policies towards pollution (or maybe lack thereof in some cases).

Hi Robert
You are right: sometime the FEM monitors show an incredibly low measure, even if the air is highly polluted. Unfortunately the FEM testers collect data in 24 hours and show just its average. In this way it is impossible the catch short bad events or see the changes among day and night.
Just as an example, with the sensor i have out of my window (i built it myself, with a PMS5003 sensor) i catched the last night of the year (Dec 31st - Jan 1st) - see picture below - and the pick is impressive and not traced at all by the state sensors. It is due of course to the new year’s eve fireworks, something we are trying to ban, with no success up to now. 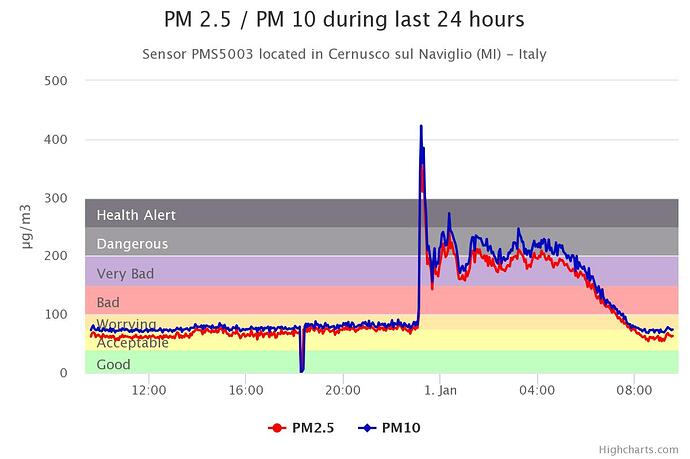 Yeah, not sure that long of averaging is helping anyone. As you’ve shown in your firework example, levels of pollution that even for short periods are harmful would be totally missed (same with government meters here).

That plot reminds me of July 3rd and 4th here in the states. The PurpleAir map of the United States becomes one big sea of red and purple readings. Most people are unaware of the harms of inhaling this level of pollution, or don’t care (so yeah, trying to change practices can be difficult).

P.S. Your PMS5003 sensor has LAN data collection?, without WIFI needed. I could be interested to buy ha.

Hi Robert, sorry for the delay answering
The one day averaging is just needed by law: pollution is measured (at least here in EU) counting the days over the threshold (50microgr for PM10) and after a certain number of days they block private cars or other stuff, which are about unusefull. Pollution goes down only when it is windy!

About my sensor: it is controlled by a Raspberry PI 3B+, which is actually connected to wifi. It is outside, so wifi is easier. Anyway, Raspberry also has a LAN-Ethernet port, so i think no problem to connect it by cable, but i didn’t try.
Ciao!
Fabio