I am not yet an owner of a PA sensor, but am trying to understand the correlation between these sensor readings & the “official” readings?
Shown below are PA readings from ~12:30pm today vs the one Oregon DEQ reading from Noon PDT (11am PST).
All this week with some forest fire smoke in the area have been much higher on PA than the DEQ sensor.
The DEQ used to have a second sensor ~1.5mile NNE of this one that would often read a bit higher than the remaining one.
The ~22 ug/m3 vs ~38 … and 66 AQI vs ~108 AQI seem like a big difference. The PA values seem to agree over a ~2mile radius around the DEQ sensor. 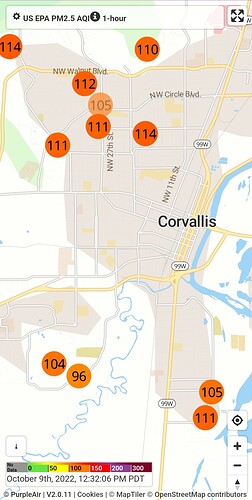 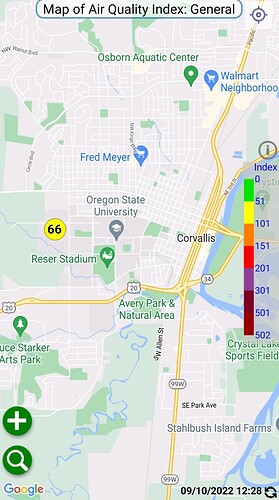 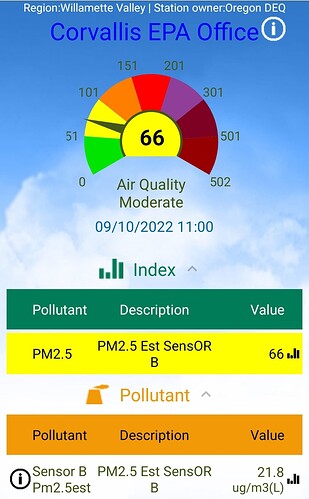 I’ve found my local EPA, or state sponsored readings to be fairly useless. I don’t know if they have an extreme averaging on them, but they’ll often read much higher (or lower), than the Purple Air readings. Many times, had I only relied on those readings, I’d be out in some pretty bad air, despite the government meters saying all is well.

Greetings from the land of the duck

If you’re comparing PurpleAir sensor data to Federal spec monitors, especially for wood smoke, apply the US EPA conversion on the PA map. The uncorrected values will substantially overestimate actual concentrations; the correction will get you much closer to the monitors. Those monitors only update once an hour, though, so they may lag a bit during smoke invasions. Geography plays a large part in sensor accuracy as well.

If you want to get into the math behind it, here’s a good start: PurpleAir PM2.5 U.S. Correction and Performance During Smoke Events 4/2020 | Science Inventory | US EPA

If you apply the US EPA conversion in the PurpleAir map, you’ll probably get a better similarity in the PM2.5 readings between the PA and DEQ sensors.

You should also keep on mind that the official AQI is derived from 24-hour (simple) average of the PM2.5 concentrations. This is the reason why the official AQI is changing slowly and lagging behind the PA AQI with shorter averaging periods (you can also choose a 1-day average in the settings of the PA map).

Furthermore, the US EPA also has the “NowCast AQI”, which uses a more sophisticated calculation method that gives more weight to recent readings when the PM2.5 concentrations are changing (check its formulation online if you’re interested). This is better for tracking changes in air quality and minimizing exposure to pollution (wrt the official AQI). I know that at least “AirNow” displays this index on their website. So if you take your AQI from there and compare it with PA’s “US EPA PM2.5 AQI”, be aware that you’re not comparing apples to apples.

For being comparable with AirNow, maybe we should ask PurpleAir to add the option to see the NowCast AQI on the map (in that case, choosing an averaging period would be irrelevant).