A: There are two major differences between PurpleAir sensors and regulatory sensors: the method of measuring particulate matter and the averaging time of the data collected.

Methods:
PurpleAir sensors use a laser particle counter to count the number of airborne particles in the air. That count is used to calculate a mass concentration, assuming an average particle density in an algorithm developed by the laser counter manufacturer, Plantower. An average density must be used because not all particles of a particular size are made of the same stuff. For instance, PM2.5 from wildfire smoke will have a different density than PM2.5 from dust blowing off a gravel pit. This means that mass concentration of PM reported by a PurpleAir sensor can vary depending on the specific composition of PM for a given area, thus making the sensors appear to “read high.” So far, two different research groups have completed studies for their areas and created conversion factors specific to the composition of particulates in their air: AQ&U and LRAPA.

Federal reference sensors typically measure mass concentration of PM by drawing air through a filter and weighing the filter. This method is expensive, difficult to install, requires a specialist to maintain the sensor, and reports on an hourly scale. Because of this, many cities have a limited number of these sensors (or none at all) and it’s not feasible for the general public to have their own.

Averaging Time:
PurpleAir uses the AQI breakpoints established by the US EPA to convert real-time mass concentration of PM into the AQI published on the PurpleAir map. However, most regulatory groups report AQI as a 24-hour average that gets updated every hour or so. If you look at PM on a website like AirNow, a PM2.5 AQI of 150 means the average AQI in the last 24 hours was 150.

PurpleAir sensors report real-time data that is updated every 120 seconds. Since air quality can fluctuate greatly throughout the day, the real-time PurpleAir AQI reading may appear “high” when compared to 24-hour averaged AQI data.

If you want to compare 24-hour averaged AirNow data with 24-hour averaged PurpleAir data, you can look at longer-term averages on the PurpleAir map by selecting the averaging period from the options in the upper left, or by checking the “Averages as Rings” in the Map Data Layer box in the upper left-hand corner of the map. Be sure there is no conversion applied to get to check box to appear. 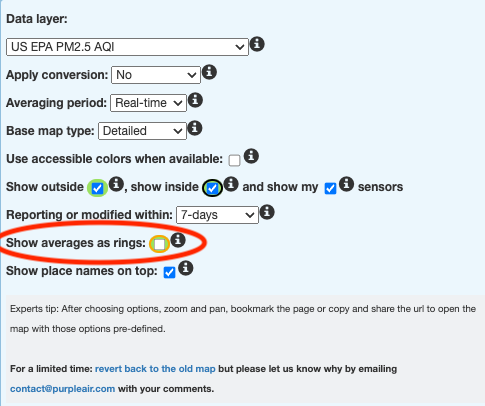 Each ring represents the averages:

Center of the circle = Real-time averages

I appreciate response article and its effort to distinguish data collect by purple air sensors versus the US EPA sensors, as well as it’s partner article on conversion factors.

It seems that the EPA has updated its methodology for reporting PurpleAir data, and this article needs a correction. It seems PurpleAir sensors reported on AirNow do not report on the 24hr average as you describe above. I’m basing this off of comparisons of your map with different filters/conversions applied, as compared to PurpleAir sensor data reported on AirNow, as well as based on the effort describe in these papers to normalize PurpleAir Data to US EPA sensors: