The map code should limit the AQI to zero after conversion. Otherwise this happens. This screenshot was taken with the map set to show US EPA AQI with the US EPA conversion during rainy & windy weather. Map version Modern V2.0.11. 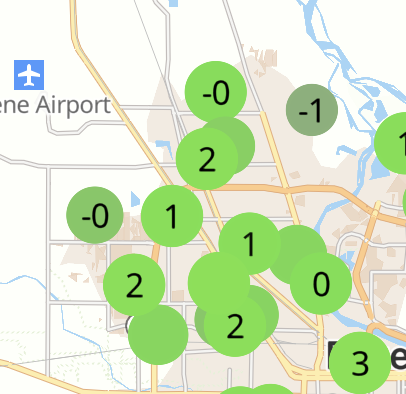 The negative AQI readings from the EPA conversion are due to the correction for RH contained in the EPA model. At PM2.5 concentrations very close or equal to zero (using the CF_ATM algorithm provided by the Plantower manufacturers of the PMS 5003 sensor), the correction for Rh levels during rain (close to 100%) drives the estimated concentration to negative levels. This is exacerbated by the decision of Plantower to assign a value of zero to all measurements below a small arbitrary value. The conversion factor ALT-CF3 does not use the CF1 or CF_ATM algorithms and never produces negative or zero values, (although values below about 0.5 may be rounded off to zero on the map.)